For additional information, read the entire entry at the Gale Encyclopedia of Mental Health

“Kids will be kids,” the saying goes, so warning signs of bullying are often overlooked as a natural part of childhood. However, although playground bullies have been around since time immemorial, such behavior should neither be considered acceptable nor excusable. Bullying is a form of abuse and violence, and the tragic Columbine High School massacre in 1999 underscores the potential dangers of unchecked bullying.

There are many forms of bullying. Bullies may intimidate or harass their victims physically through hitting, pushing, or other physical violence; verbally through such actions as threats or name calling; or psychologically through spreading rumors, making sexual comments or gestures, or excluding the victim from desired activities. Such behavior does not need to occur in person: Cyberbullying is a persistent pattern of threatening, harassing, or aggressive behavior carried out online.

There are many reasons to stop bullying. Bullying interferes with school performance, and children who are afraid of being bullied are more likely to miss school or drop out. Bullied children frequently experience developmental harm and fail to reach their full physiological, social, and academic potentials. Children who are bullied grow increasingly insecure and anxious, and have persistently decreased self-esteem and greater depression than their peers, often even as adults. Children have even been known to commit suicide as a result of being bullied.

People who are bullies as children often become bullies as adults. Bullying behavior in the home is called child abuse or spousal abuse. Bullying also occurs in prisons and in churches.

Recently, attention has been turned to the topic of bullying in the workplace (sometimes called harassment), where bosses and organizational peers bully those whom they perceive as their inferiors or weaker 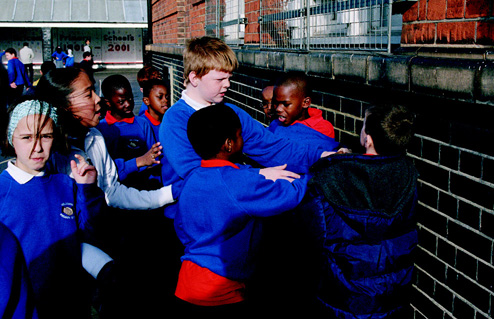 than they. Those bullied at work often become perceived as ineffective, thus abrogating their career success and influencing their earning potential. Victims of workplace bullying often change jobs in search of a less hostile environment because organizations are frequently not sensitive to the issue of workplace bullying or equipped to adequately or justly deal with it.

Bullying among children is a persistent and substantial problem. According to a study published in 2001 by the Kaiser Family Foundation and Nickelodeon Television, 55% of 8-11-year-olds and 68% of 12-15-year-olds said that bullying is a “big problem” for people their age. Seventy-four percent of the 8-11-year-olds and 86% of the 12-15-year-olds also reported that children were bullied or teased at their school. Children at greatest risk of being bullied are those who are perceived as social isolates or outcasts by their peers, have a history of changing schools, have poor social skills and a desire to fit in “at any cost,” are defenseless, or are viewed by their peers as being different.

A study of more than 16,000 children in the sixth through tenth grades conducted for the National Institute of Child Health and Human Development found that bullying is a common problem in the United States and requires serious attention. Nearly 60% of the children responding to the survey reported that they had been victims of rumors. More than 50% of the children reported that they had been the victims of sexual harassment.

Children who are identified as bullies by the time they are eight years of age are six times more likely than other children to have a criminal conviction by the time they are 24 years old. Bullying behavior may also be accompanied by other inappropriate behavior, including criminal, delinquent, or gang behavior.

Bullying in the workplace

Although research has been conducted on bullying in Europe for some time, the topic has only recently become of interest in the United States. There are no “official” figures currently available for incidents of bullying in the workplace. However, the nonprofit Workplace Bullying Institute conducted an informal survey of 1,000 self-selected volunteer respondents. Although it cannot be assumed that the volunteers answering the survey are representative of individuals in the workplace in general, the results do give food for thought concerning the prevalence of workplace bullying.

As of this writing, there is no evidence to support the theory that there is a genetic component to bullying behavior. Particularly in children, it is most often theorized that bullying is a result of the bully copying the actions of role models who bully others. This frequently happens when bullies come from a home in which one parent bullies another or one or both parents bully the children. When such behavior is modeled for children with personality traits such as lack of impulse control or aggression, they are particularly prone to bullying behavior, which is often continued into adulthood.

Below is a comprehensive guide about the different types of bullying and preventive measures students, parents, and educators can take.