Institutions with access to ProQuest Congressional optional digital modules will access the enhanced digital version of records to which they have access, rather than the index-only version.

Legislative histories can be long documents and include the enacted bill, related Bills, links to the Congressional Record, Hearings, Senate/House Reports, Committee Prints, and descriptors. You can navigate to each section of the Legislative History using the Left Navigation box for "Document Segments". There will be hyperlinks to the online documents- either the full text of the bill, law or reference to the Daily Congressional Record, if it is available online, or an abstract giving you locator information for the print or microfiche. 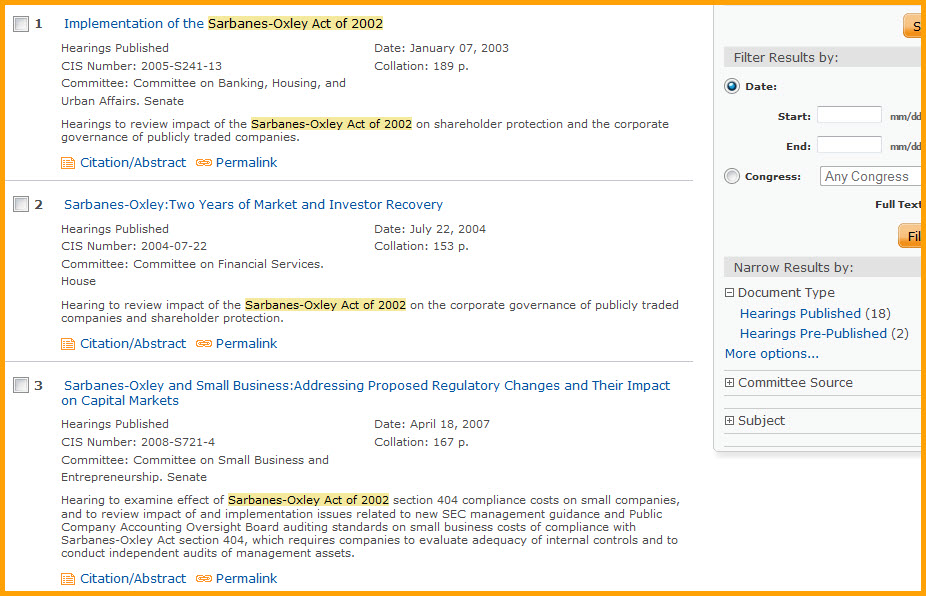 The "Retrieve Selected Testimony" feature offers access to witnesses' written statements and selected hearing transcripts from 1988 to the present, provided by various third parties who cover Capitol Hill. An optional module, the CIS Historical Indexes, provides brief content summaries, indexing, and witness lists for hearings from 1789-1969. Because there is no requirement that congressional committees publish hearings, some hearing transcripts are transferred to the National Archives where Senate hearings remain for at least 20 years and House hearings for 30 years. Hearings that are not published due to national security concerns may remain sealed in the National Archives for up to 50 years before they become accessible to the public. The indexes in Congressional provide information about these unpublished hearings, as well as recent hearings that have not been published yet ("pre-published" hearings). It can take up to two years for the GPO to print some hearings. 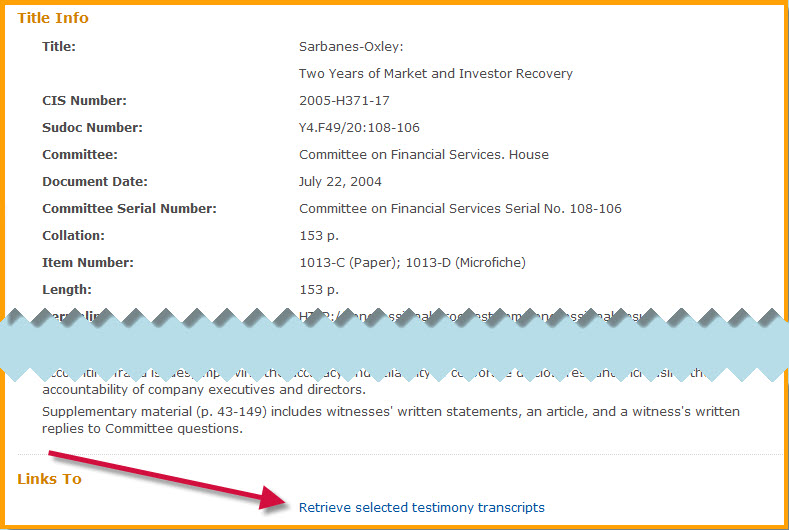 To search the FULL TEXT of these selected hearing transcripts you must start from the ADVANCED search screen and use the pull-down menu to select "ALL FIELDS INCLUDING FULL TEXT". 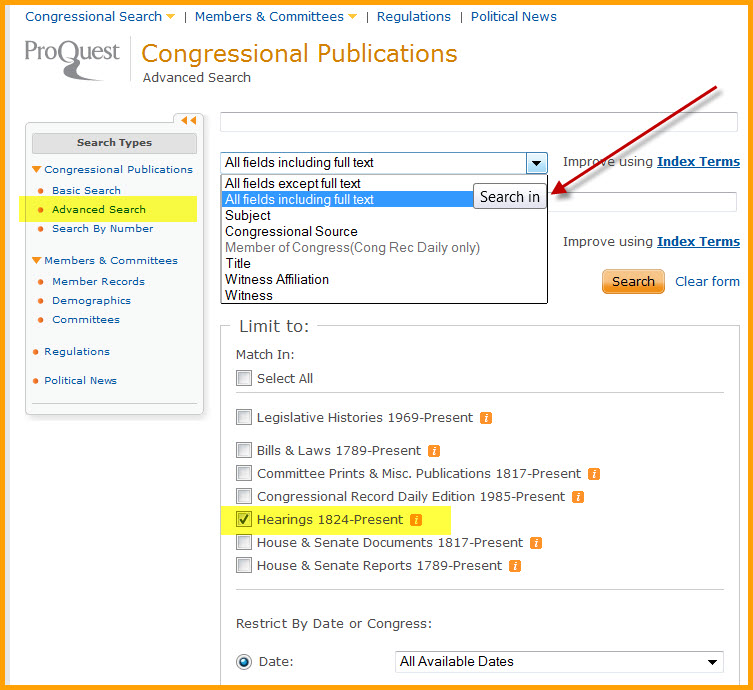 The Congressional Record contains the proceedings and debates of Congress, and is an excellent source for debates on a particular topic and for statements by specific speakers. The daily edition reports each day’s proceedings in Congress and is published on the succeeding day. 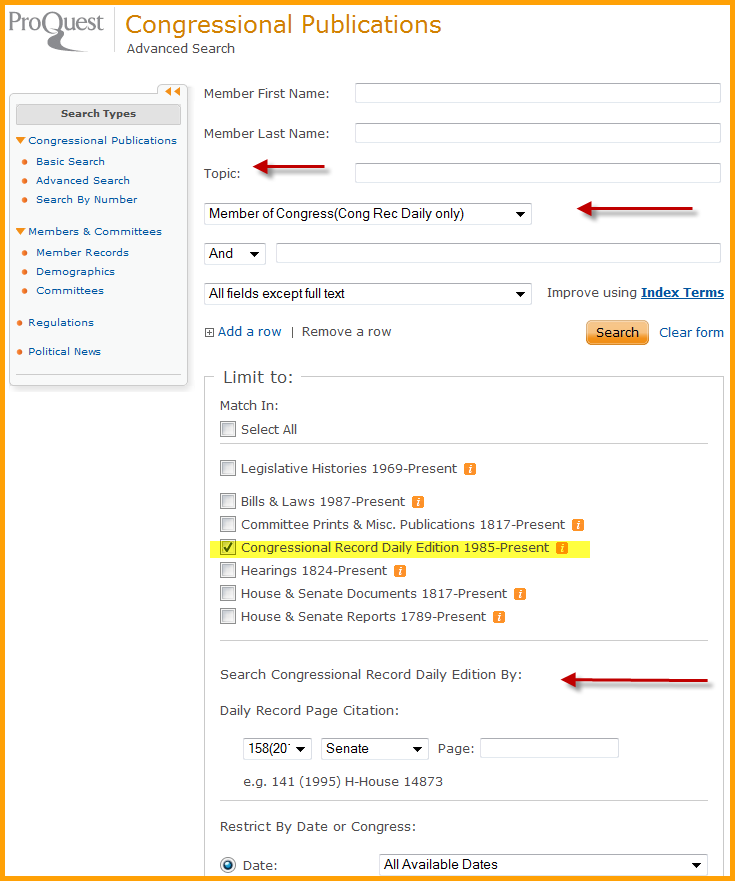 You can search the Daily Congressional Record for examples of when a particular member of Congress spoke on a particular topic using the ADVANCED search form (See the arrows in thescreen shot above.)

You can search for the the activity for a particular day Congress is in session by using the Restrict by Date field (no search term is necessary if you have Limited to: Congressional Record Daily Edition. You can also retreive a particular page using this selection. You can also do this from the SEARCH BY NUMBER page.

Bill tracking reports may be quite lengthy and detailed. For bills that were not signed into law, these are the way to track where the bill was sent and what may have happened. 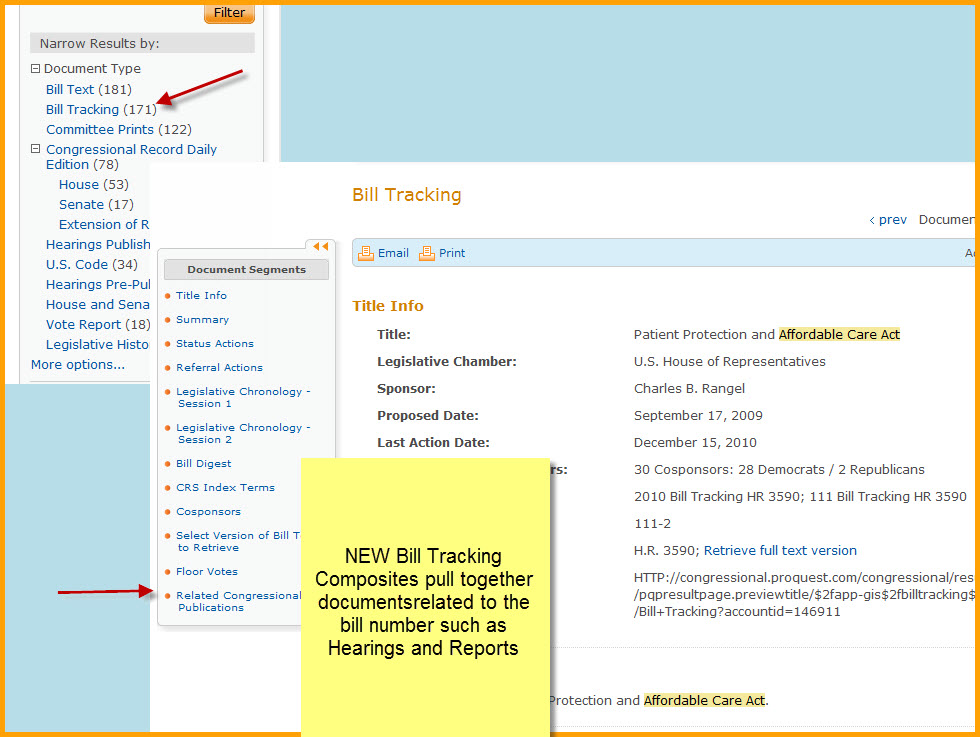 The Congressional Basic service abstracts and indexes Congressional reports on public and private legislation considered during each Congress. You can search the abstracts and indexing for keywords using the BASIC search form. To search the FULL TEXT for reports available online in plain text (HTML) use the ADVANCED search form and select "ALL FIELDS INCLUDING FULL TEXT." Limit to or filter to include House & Senate Reports.

Committee Prints are known as working papers for Congress. Some prints are a compilation of materials on the topic. Other examples of prints includes journal articles, CRS reports on legislation and more. You can search the abtracts and indexing of committee prints for keywords using the BASIC search form. To search the FULL TEXT for prints available online in plain text (HTML) use the ADVANCED search form and select "ALL FIELDS INCLUDING FULL TEXT." Limit to or filter to include Committee Prints.

House and Senate documents are included in the Serial Set.

Once the President submits a treaty to the Senate for ratification, the treaty stays alive and carries the same publication number, regardless of the Congress, until it is ratified, defeated, or withdrawn.

The majority of the treaty documents concern treaties with foreign governments, but until 1870 they also included treaties with Indian tribes.

These highlights indicate what's covered as part of the basic subscription:

Using the Members and Committees search page, users can find information on specific members of congress or specific committees. The Demographics search form allows users to create groupings of like members.

Demographics form allows users to create listings of members of each Congress from 1985-present (searched sepately for each Congress) using keywords or pre-selected categories.

Committees search form allows users to find the compostion of committees, ranking members, address, URL and more. Committees and subcommittees are listed separately, and the committee schedules can be searched.

Note: The Member look-up links only cover the 105th Congress (1997)-present although we have Member & Committee information as far back as 1987 for most categories. See the Content Coverage chart for more information.

The Congressional Basic Subscription contains political news to keep you informed and to search for what news-makers are saying about legislation, Congress, and the issues that Congress is tackling. Your search results will allow you to sort by date and filter by source.

CQ Political Transcripts includes a variety of articles relating to Congress and legislation, including: